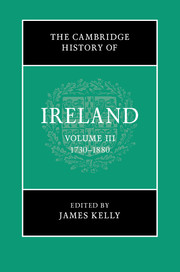 The Cambridge History of Ireland

Part of The Cambridge History of Ireland

Looking for an inspection copy?

This title is not currently available on inspection