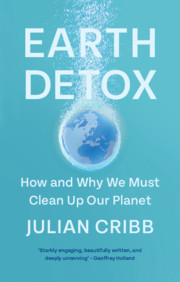 Earth Detox
How and Why we Must Clean Up Our Planet

Every person on our planet is poisoned every day by our chemical emissions. Julian Cribb explains the scale of the threat to individuals, human society, and life on Earth.

Man-made toxins affect our health, safety, and lives: this book plots an empowering, hopeful path to a safer, cleaner world.