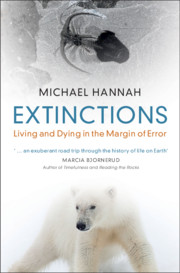 Extinctions
Living and Dying in the Margin of Error

An Interview with Michael Hannah author of Extinctions