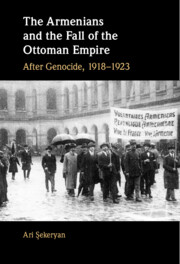 The Armenians and the Fall of the Ottoman Empire
After Genocide, 1918–1923