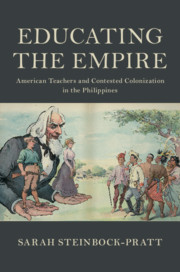 Educating the Empire
American Teachers and Contested Colonization in the Philippines

Part of Cambridge Studies in US Foreign Relations