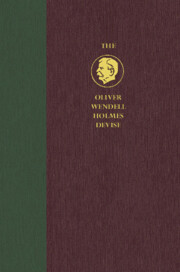 The Hughes Court
From Progressivism to Pluralism, 1930 to 1941