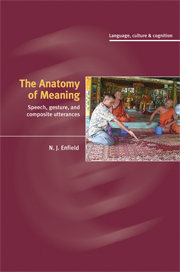 The Anatomy of Meaning
Speech, Gesture, and Composite Utterances

Part of Language Culture and Cognition