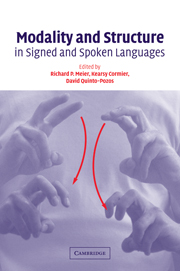 Modality and Structure in Signed and Spoken Languages