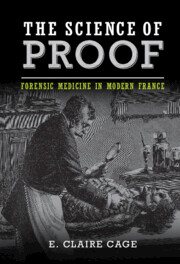 The Science of Proof
Forensic Medicine in Modern France

Part of Studies in Legal History