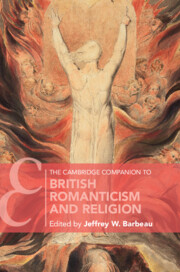 The Cambridge Companion to British Romanticism and Religion

Part of Cambridge Companions to Literature