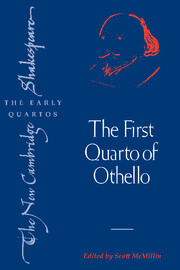 The First Quarto of Othello

Part of The New Cambridge Shakespeare: The Early Quartos