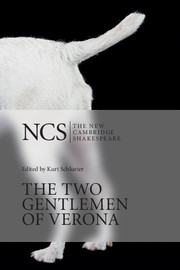 The Two Gentlemen of Verona

Part of The New Cambridge Shakespeare