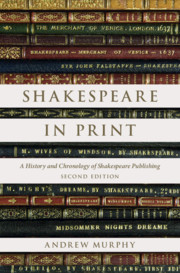 Shakespeare in Print
A History and Chronology of Shakespeare Publishing