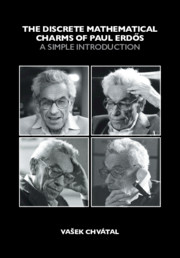 The Discrete Mathematical Charms of Paul Erdős
A Simple Introduction