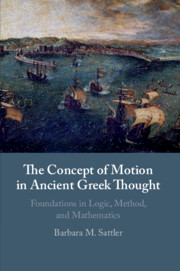 The Concept of Motion in Ancient Greek Thought
Foundations in Logic, Method, and Mathematics