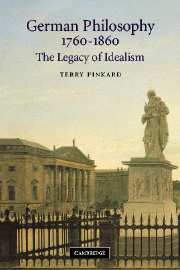 German Philosophy 1760–1860
The Legacy of Idealism