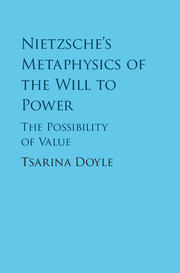 Nietzsche's Metaphysics of the Will to Power
The Possibility of Value