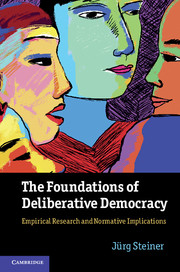 The Foundations of Deliberative Democracy
Empirical Research and Normative Implications