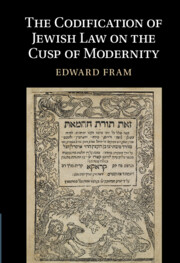 The Codification of Jewish Law on the Cusp of Modernity